A Murder of Crows - part I

Finally we can present the first part of the battle report from last Saturday´s epic clash.

Our bard-in-residence Alexander, opted to write up the report in his signature "norse saga"- esque style. Over to you Alexander:

As an age of darkness fell across the world, the Crimson Crow cawed.

In answer, from the south sea, the Sea of Claws, the Great Beast emerged. And on his head was the Third Crown and he bore the Mark of Pain. And the Host of Colours cried out a name to the uncaring gods. That name was Chargul Doldrekk. 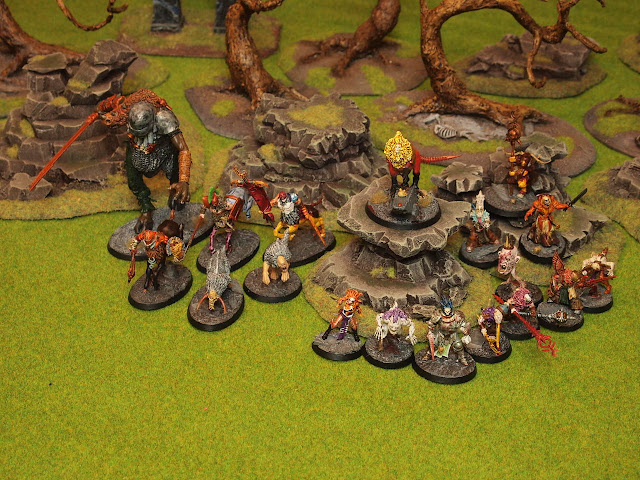 Then the Golden Crow cawed.

And from the North Sea rose the Raven Lord, answering the call. The Aetheric Raider, the Knight Scholar, the true child of chaos. In his left hand he held the Tome of Fate and in his wake followed a glittering multitude of neophytes. From their souls a tortured whisper echoed across the Chaos Wastes. Kithelon. 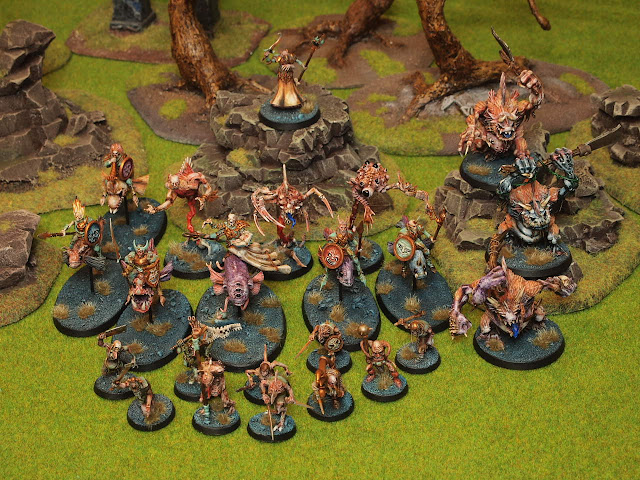 As the wolf howled, the third host shambled forth across the Isles of the Dead. The jovial killers - the diseased followers of Nurgle. Sardonic laughter filled the air as they approached, for only they truly saw the world for what is was. And the champion chosen to deliver the final pun of that great cosmic joke was Mawgut Gloop, favoured child of Grandfather Nurgle. 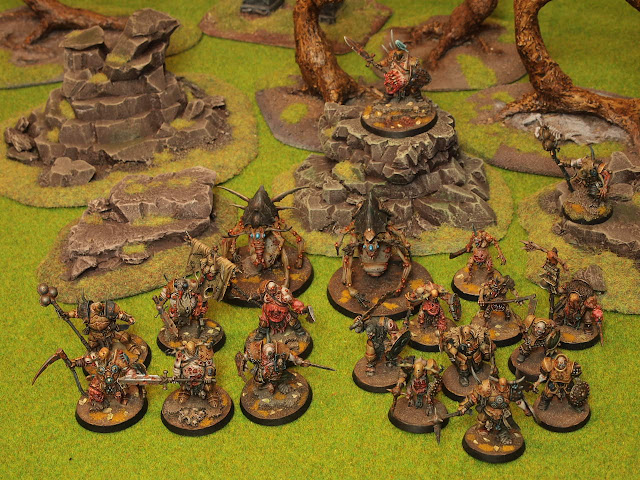 And as the three lords met on the field of Vigrid, the Great Wolf rose up and devoured the sun. It was the red sign. The blood eclipse. The final call to war. Blades were bared in joy and shields were rattled. The withered grass would soon drink its fill of blood. And the gods roared with delight.

Zelgul Scalecackle led his knights in a headlong charge upon Spleech and his blightkings. Schemes and plans set aside, now was the time for steel. Ancient scores would be settled and one of the champions sent to the narrow house. 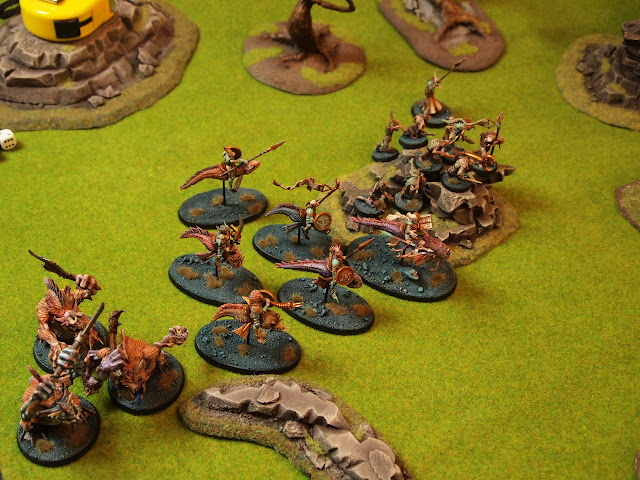 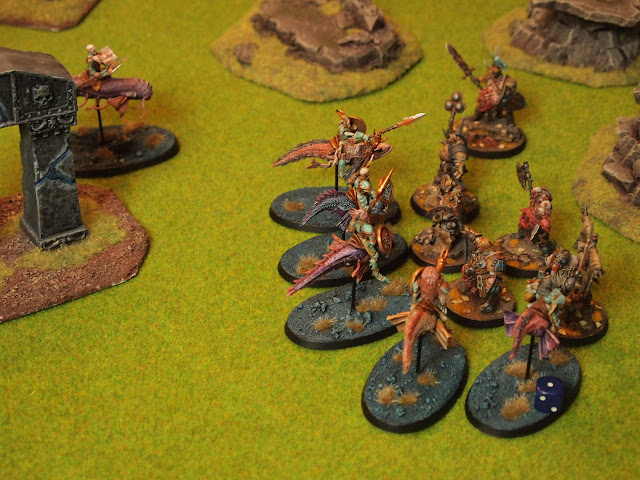 A chilling wind rose, turning into a screaming vortex from which a coven of chaos trolls shambled out into the material realm. Hate burned within them as they laid eyes upon their bloated cousins. Twisted abominations stared at each other with malice. 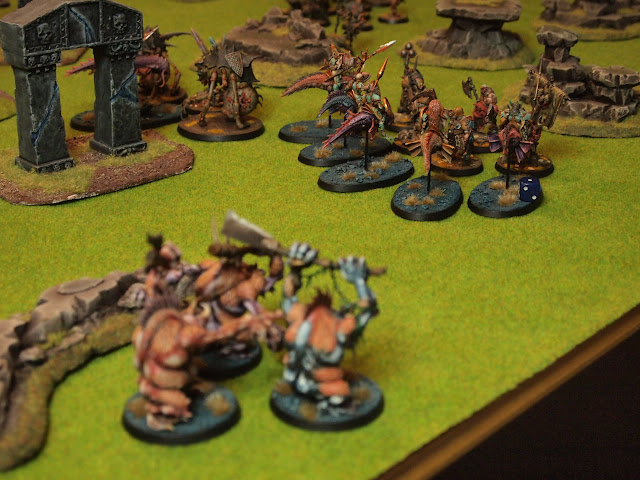 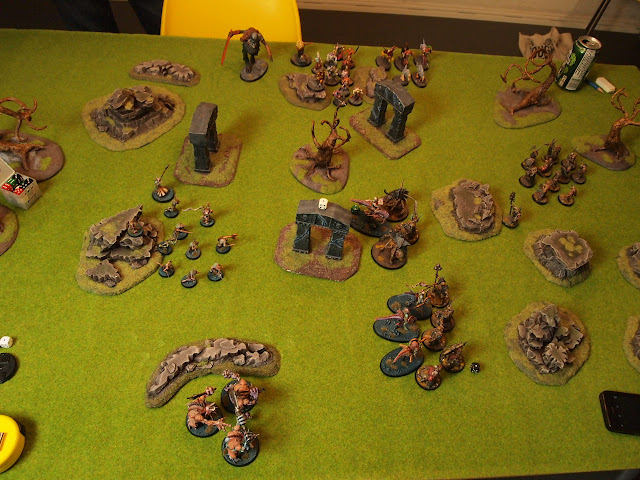 While the children of decay and progress fought in blind frenzy a shadow fell over the sorcerer Feldrek Flameborn. Surtr, giant lord of Muspell, was upon him. Twice sang Laevatein, the blade of flames, and in a burst of colours Feldrek disappeared. 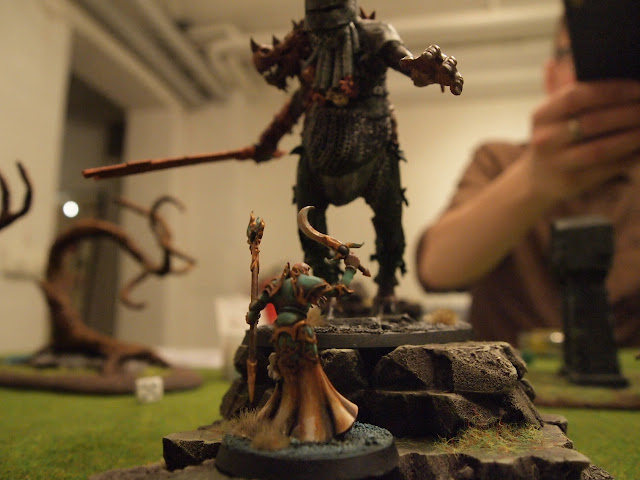 Having held back at first Chargul Doldrekk - Gods Hand - stormed across the field. The Chaos Lords claws were soon stained vermilion as he laid waste to the Fatekin that served Kithelon. 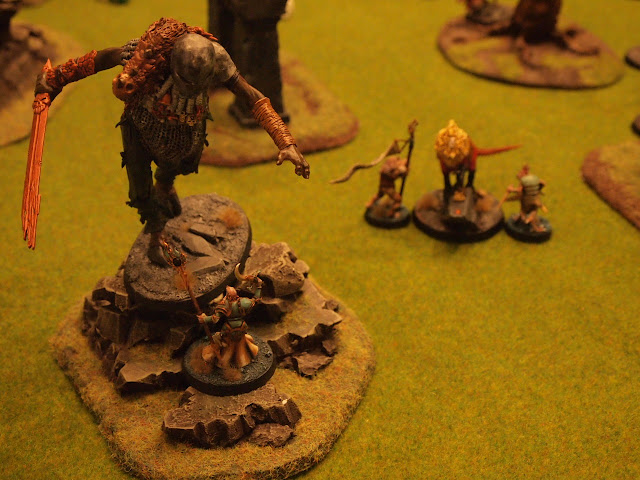 The Great Beast Chargul Doldrekk howled in triumph over his broken foes. 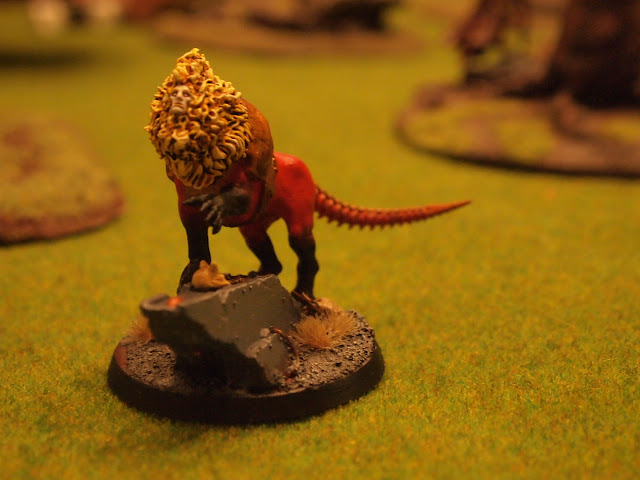 Spleech and his followers cut the Ascendants ascendance short and turned their attention upon the fish trolls. In a daring and deceitful move the Order of the Gash attacked the two chaos lords as they dueled. 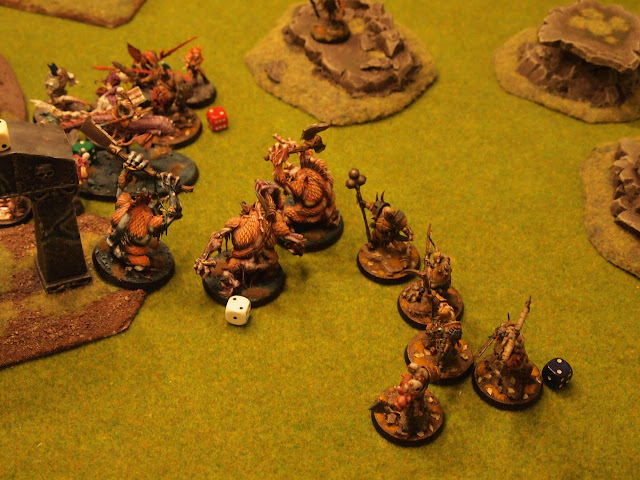 Snarling Doldrekk threw himself upon the festering Blightkings. Claws rending and tearing, fangs bared in a frenzied scream. Following closely Surtr followed his lord into the mêlée. Where even the magical trolls had failed the combined might of these two primordial beings would triumph. Bones broke and decaying flesh was torn apart. 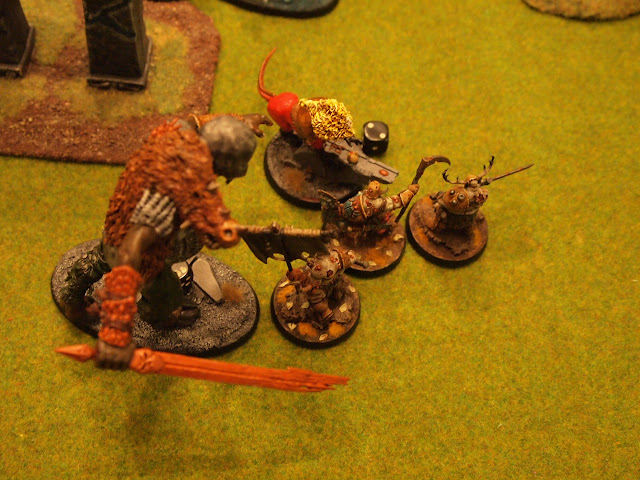 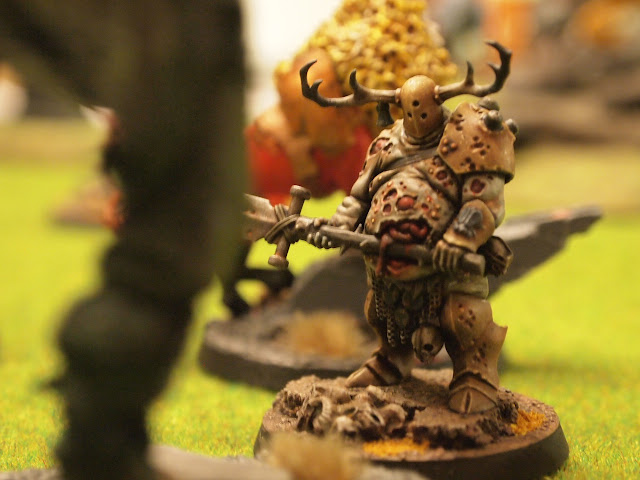 The slaaneshii centaurs - the Order of the Seed hunted well. Nergal the Plague Sorcerer, was soon added to the trophy rack. 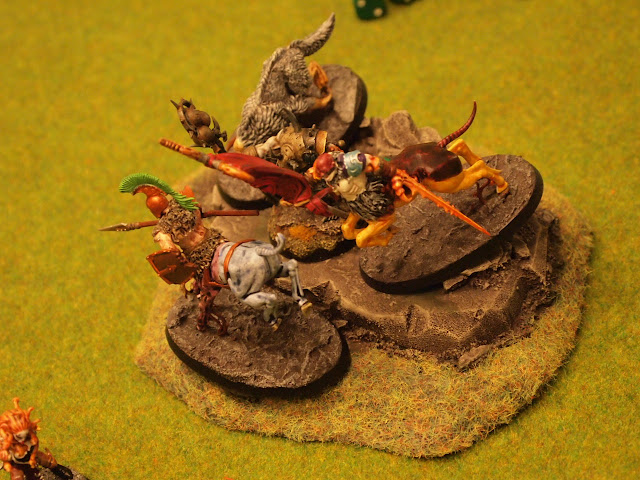 Neither man nor beast could best Mawgut Gloop. Even as his flesh was torn asunder it reknitted itself and formed new disgusting shapes. His spear struck again and again, every strike a killing blow. 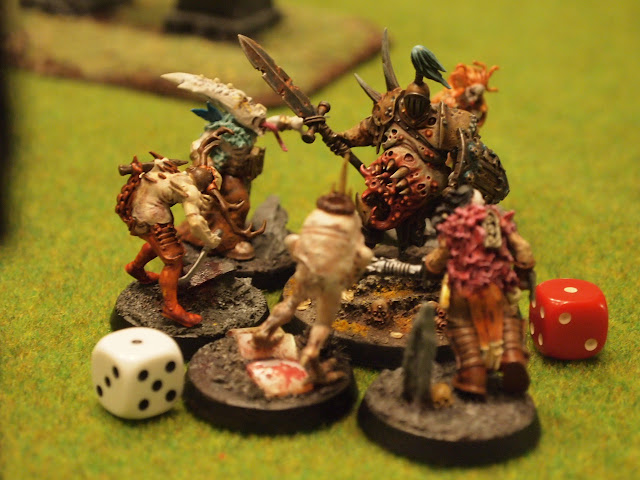 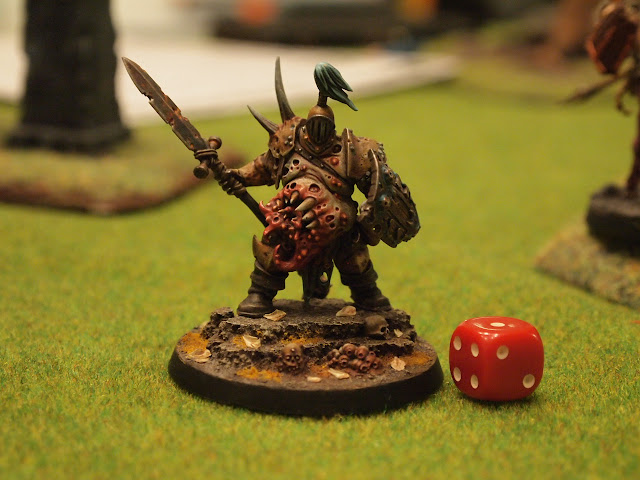 But in the end the day belonged to The prince of Pleasure. For while the children of Nurgle and Tzeentch fought well they could not defeat the sly cunning of Chargul Doldrekk and his childen dominated the battlefield. 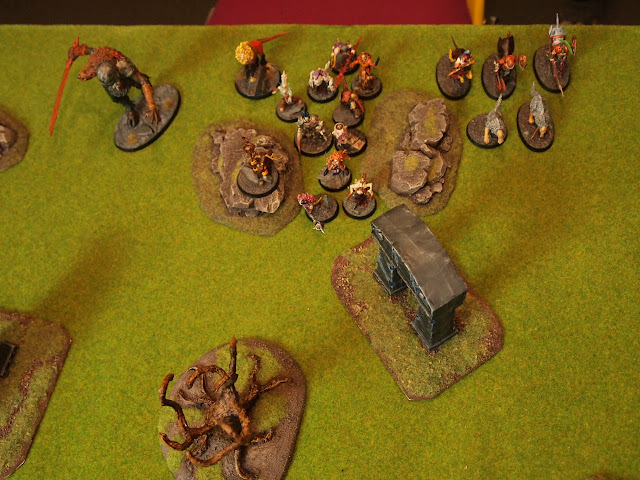 So to recap - in our first battle Alexander cleverly held back while the forces of Nurgle and Tzeentch clashed. Then he swept in and decimated our already weakened forces. After six rounds he was the only one with any models left (other than champions) so we decided the victory belonged to him.
It was also time for lunch...

This game was a real brawl without much strategy as we simply wanted to get a feel for the rules. All in all we were all pretty pleased with the game mechanics - though the fact that we had three players and we initially didn´t know the rules slowed the game down. We´ll be back soon with round two where some actual tactics came into play.

My name is Johan AKA Jeff Vader.
This is my blog about the conversion and painting of tiny plastic miniatures. The Convertorum is also a celebration of the the gothic, twisted and sometimes downright weird Warhammer universes and the fantastic art that has helped defined them.
I’m also on The Instagrams:
https://www.instagram.com/the_convertorum/